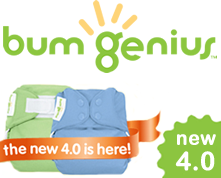 Well after the success and love of our Bum Genius V3’s Fizz got sent a V4 to compare.

What automatically stood out to me is that the press stud style poppers are a very welcome addition. Now Fizz recently figured out that pulling back the velcro on her V3’s made a lovely sound and this has now led to many an occasion of a half attached nappy!

Unable to undo the poppers means Fizz keeps her modesty and we also don’t have any accidents!

The improvements to the gusset aren’t really noticable until washing. Washing the V4 after a dirty nappy I was surprised to see no staining around the gusset area, the nappy seems to stretch further and it seems it also allows this to wash up better. I suspect that the extra stretch is so the nappy last well into toddling and can also be used during the start of potty training too.

I also liked having a paler colour nappy. It meant not having to think too much about the clothes Fizz had over the nappy.

All in all the V4 has bettered it’s predecessor. Not by much but the adaptations were a much welcome change for mum and Fizz.

I am married to Gav and mummy of a gorgeous girl who arrived 11 days late in December 2009. I started blogging in 2009 when I was 17 weeks pregnant after becoming frustrated reading pregnancy books and wanting something a bit more open and honest. I started to write for a local newspaper and loved being able to share all things mummy, wife and life related, sometimes whingeing but positive also! I love music and reading but am currently immersed in anything baby related. I love my life!